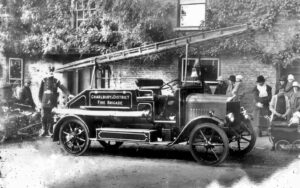 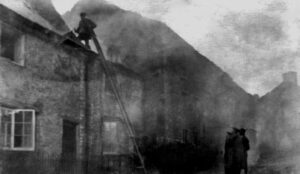 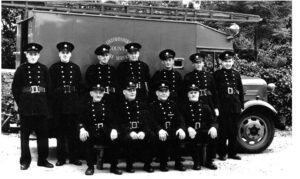 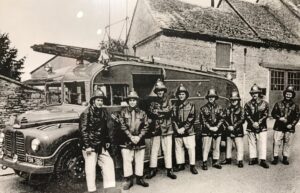 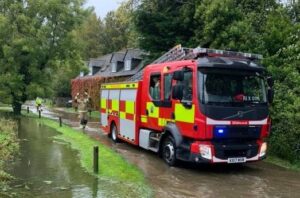 Have you ever thought about how fires were tackled before the Fire Service existed?

There was a large fire at a farm in Bull Lane in the 1870s. A double line of people, mainly women and children, formed from the nearest pump and buckets of water were passed hand to hand along one line to the men at the fire, the empty buckets coming back down the other. Many pumps were used.

The Charlbury Volunteer Fire Brigade was formed in 1881 by Capt Waller, then of Lee Place. The horse-drawn carriage was housed in the old lock-up on the Playing Close. Later a subscription was formed to buy a new improved engine, a Shand-Mason, which was worked by a hand pump. If the fire was out of town it was pulled by horses but if in the town, then the men pulled it.

Originally a bugler ran through the streets alerting the fire brigade (and everyone else) to a fire. Later a fire bell, now in the Museum, was in place in Church Street.

The fire station remained on the Playing Close until the 1920s, when, following a large fire on 25thDec 1925 at Shilson’s Wool Staple Store in Park St, a public meeting was held and another subscription started to buy a new motor vehicle and modern equipment. This Dennis motor arrived in October 1926. The engine cost £785 and the new hose £185. The new engine required larger premises and a new fund was started to provide a new fire station in Browns Lane… now The Old Fire Station. Concerts and fetes were held to help raise the money for the new building and for the ongoing costs of the engine.

In 1933 the Fire Brigade Act constituted all councils as the fire authority. Later in 1947 the Fire Services Act made the county councils responsible.

In 1973 the current fire station opened in Sturt Rd – still manned by volunteers and covering Charlbury and the surrounding area.

A short history of glovemaking in Charlbury