Bringing our wagon back to life 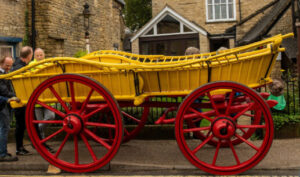 The restored wagon returning to the museum, October 2019 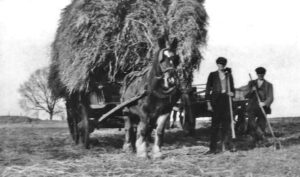 A loaded wagon on Baughans farm 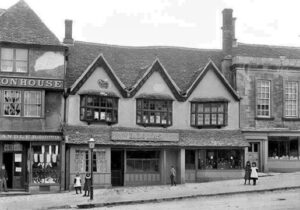 The Lomas shop in Burford

The wagon before restoration

Our wagon is a fine example of a South Midlands Spindle Sided Bow Wagon.

It was made by Longs of Aston around 1880 and spent a busy working life in the area before falling into disuse in the 1950s.  Originally made for Mr. Lomas, a butcher of Burford, it was later acquired by Miss Elsie Corbett who lived at Spelsbury House.  In 1964 it was found in a field at Coldron Mill, and donated to the museum by Miss Corbett and Miss Susan Thomson.

When the museum acquired the wagon, it was in a very fragile condition.  It had been heavily used during its long working life and showed evidence of repairs made around the time of the first world war.  But in its last few years it had fallen into a state of great neglect and disrepair.   Wood was rotting or disintegrating because of insect damage, some pieces were missing, metal parts were rusting.  Some immediate work was needed if the wagon were to survive, and Henry Apps, Reg Smith and P. Wyatt spent much time and effort filling, repairing and repainting it.  If they had not done so, the wagon would not be here today.

In the late 1990s it was decided that the wagon should be fully restored and an extension to the museum built to house it.  In 2000 Michael Jones, a skilled craftsman who worked with Oxfordshire Museums Service,  prepared a detailed report on the condition of the wagon and the work needed to restore it. The wagon was transported to Lower Dornford Farm near Wootton and there Michael and a keen group of volunteers began the painstaking work of removing the old filler and diseased wood, and stripping down the old paintwork.  Little did they know that the whole process would take nearly twenty years!  After the initial stripping, Michael worked steadily and  painstakingly repairing and shaping new pieces of wood to replace the damaged parts, keeping a detailed record of all stages of the work so that no information was lost.  The paint was carefully matched to the wagon’s original colours, based on fragments of paint found during the work, and the wagon finally looked as you see it today, as good as the day it left Longs workshop in Aston.

Huge thanks are due to many people for helping to achieve this, particularly: