The history of the museum

In March 1949, an historical exhibition was held in the Corner House, featuring many items loaned by the people of Charlbury. It was a resounding success, attracting over 650 visitors over the three days it was open. The Charlbury Society was formed three months later and some of the items which had been loaned for the exhibition were donated to form the basis of a small museum. A few of these original items are still in the museum, for example the model of the Market House, demolished in the 1870s. 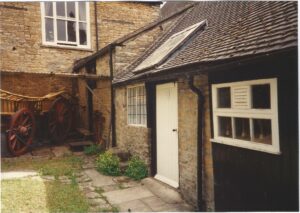 At first the museum was housed in the attics on the top floor of the Corner House, but moved to the ground floor in 1962 when they were offered two outhouses facing the barbers shop (see photo). Two years later a former boiler house was added to the space, followed soon after by a coal store. From these unpromising beginnings the museum grew and expanded and the building was greatly improved thanks to a lot of hard work by many willing volunteers and considerable financial investment. A modern extension was added in 2002 thanks to a major fundraising drive by the combined efforts of the Town Council, the Charlbury Society and Charlbury Museum.  It now houses the beautifully restored Victorian wagon which is such a feature of the collection today.

The museum has an attractive garden which was built in 2003 in memory of Gillian Naish. The garden provides a restful green oasis in the middle of town and is beautifully maintained with attractive plantings.

For a detailed history of the museum please click here.