A short history of glovemaking in Charlbury 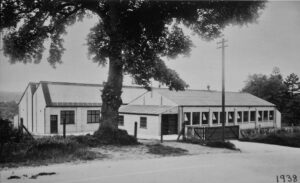 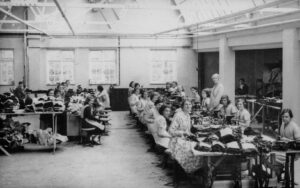 Fownes factory near the Enstone crossroads, later the Youth Hostel 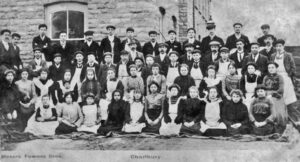 Staff outside the Fownes factory 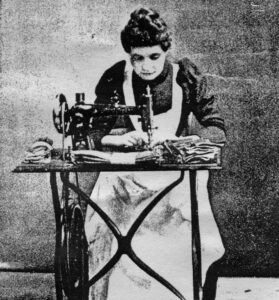 By the middle of the 18th century, West Oxfordshire had become one of the three most important centres of glovemaking in England. Long before this, women known as gloveresses had done hand-sewn work in the villages bordering Wychwood Forest, whose herds of deer provided the leather.  This tradition formed the basis for West Oxfordshire’s reputation in the glove and leather trades.  The Napoleonic Wars brought increased prosperity to the industry, as did the building of the railways a generation later, especially the line from London to Worcester.

In 1852 Gardener’s Gazette reported that the largest manufacturing centre in West Oxfordshire was in Charlbury.  It was owned by Samuel Pritchett, whose premises were at the Old Post Office in Market Street.  In the 1851 census Pritchett was listed as farmer, leather dresser, draper and grocer as well as glove manufacturer.  In gloving alone he employed 28 grounders, 8 bleachers, 16 cutters, 8 layers-out and ironers, 8 boys and 820 females. Many women were employed as outworkers, working from their cottages in Charlbury and outlying villages.

In 1876 William Bowen established another factory in Hixet Wood, and soon afterwards small factories appeared in Sheep Street and Fishers Lane.  These firms too employed young women as outworkers at home.

Women’s earnings at home from gloving were an important part of the family budget especially at times of high unemployment among farm labourers. Young children were encouraged to help their mothers who were paid on a piece-work basis, and where a widow was head of the household, she and her daughters often supported themselves by gloving.  Mothers passed their gloving skills on to their children, and children as young as 5 or 7 years were listed as gloveresses on census returns in the late 1880s.  Older women someimes continued working into their 70s and 80s.

Usually one woman acted as carrier for the village.  They would use the regular weekly waggoner or carter coming to Charlbury to bring the finished work back to the factories.  Minster Lovell’s carrier came into Charlbury once a week accompanied by his wife with the finished gloves – all hand sewn at 3¼ per pair.  Later some women would use bicycles to bring the village bundles into town, returning with raw materials for the next batch. 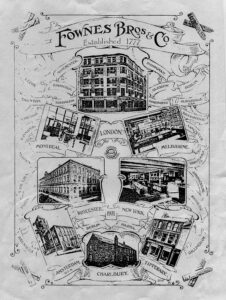 In 1896 Messrs. Fownes of Worcester brought twelve leather cutters to Charlbury and with other cutters from Yeovil they opened a modern factory off the Ditchley Road.  They trained other local workers and in 1926 the firm built six houses in Hundley Way in which to house them.  Fownes also introduced a system of apprenticeships.

In 1915 another firm, Messrs, Burt & Shire set up business in Market Street behind which they built a tannery.  This caused such pollution of the town’s water supply that in 1930 the tannery had to be closed.  But glovemaking continued there until 1967.  After the First World War Arnold & Son set up a small factory in the top storey of a house in Park Street (now divided between numbers 4 & 5), which operated for 20 years.

Charlie Hughes built a factory off Pooles Lane in 1928, later demolished to make way for houses.  In 1933 the well-known firm of Dents rented rooms in Charlbury and then built a large factory at Fiveways – now occupied by Hydac Ltd.   By this time Fownes original factory had been taken over by Dents who also took over other smaller factories, though their business was much reduced after WW11.  The firm continued here until 1968 when they transferred all their activities to Warminster in Wiltshire where they still operate today.  Their closure brought an end to a local industry which had been a major source of employment in Charlbury for about 150 years.

Bringing our wagon back to life